Pictorial maps have been around for centuries – they are nearly as old as mapmaking itself! Throughout the ages, pictorial maps have been used to show the cuisine of a country, the attractions of a tourist town, the architecture of a big city, or the history of a region. They are also a wonderful opportunity for an artist to show off his signature style, as in this collection from Les Etats-Unis d’Amerique by Dore Ogrizek, published in Paris in 1946, and illustrated by the artist Jacques Liozu.

It’s so interesting to see what Liozu, a French illustrator drawing for a presumably French audience, chooses to highlight – and what he leaves out. There are really only a handful of images that work together in each map to make up the history, geography, popular culture, exports and climate of each state. For example, in his map of Delaware, Liozu includes a beautifully rendered (if grisly) image of a muscular Native American shooting a settler with his bow and arrow at close range with a banner that reads, simply, “1631.” Lewes, Delaware was (apparently!) the site of the first European settlement in the state, founded by the Dutch as a whaling and trading post in 1631. The colony didn’t last long though; a local tribe of Lenape Native Americans wiped out all 32 settlers the following year. Most American students probably won’t know this piece of history, but here it is, captured in a single image and date, in Liozu’s map. It could be a dig at the Dutch – or at the Americans. Or it could just be a piece of Delaware history that seemed important to Liozu at the time.

That’s why these maps are so fun – they’re not just kitschy 1940s Americana; they tell more than one story. Each map is a carefully curated collection, hand-drawn and hand-colored. Try and see if you can decipher the hidden history in each one. 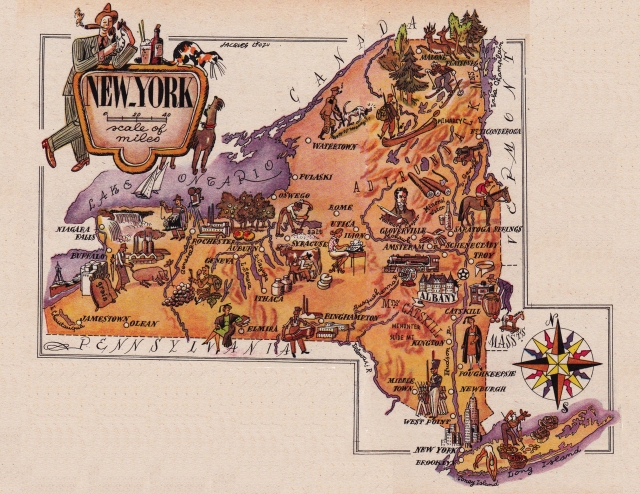 I live in the beautiful Pacific Northwest, just outside of Portland, Oregon. My usual interests are cooking, wine, horticulture, art, and old books, but lately I've been obsessed with saving for a piece of land, so I can practice sustainability and learn to live as close to the land as possible, and then help others to do the same. To relax I listen to Dharma talks. Namaste!
View all posts by redbudart →
This entry was posted in old maps. Bookmark the permalink.