I love color lithographs from the the late 19th century, so you can imagine my delight when I found a book in a bin at the Goodwill missing it’s cover and falling apart at the spine. It still had its cover page, so I knew it was titled ‘The Animal Kingdom’. Also from that single page I learned that it was published in New York in 1901 by P. F. Collier & Son, it was edited by Hugh Craig, M.A.  Trinity College, Cambridge, and it had ‘sixty-four full-page illustrations accurately and beautifully executed in eight colors and tints.’

In my hands was one of a two volume set, and in it were 28 stunning color lithographs. All done by Henry J. Johnson and copyright 1880. Eventually I will share them all with you, but I thought I would start with man’s best friend, the dog. 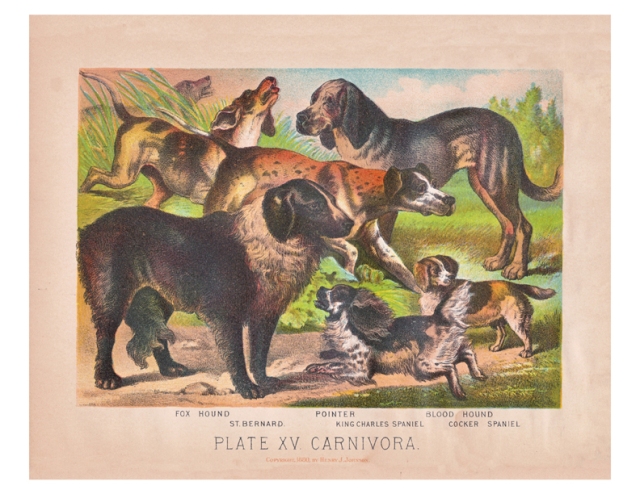 I live in the beautiful Pacific Northwest, just outside of Portland, Oregon. My usual interests are cooking, wine, horticulture, art, and old books, but lately I've been obsessed with saving for a piece of land, so I can practice sustainability and learn to live as close to the land as possible, and then help others to do the same. To relax I listen to Dharma talks. Namaste!
View all posts by redbudart →
This entry was posted in Dogs and tagged bull dog, cocker spaniel, color lithograph, dingo, dog art, dogs, henry j johnson, mastiff, pekenise, retriever, setter. Bookmark the permalink.

2 Responses to Henry J. Johnson color lithographs of dogs from 1880